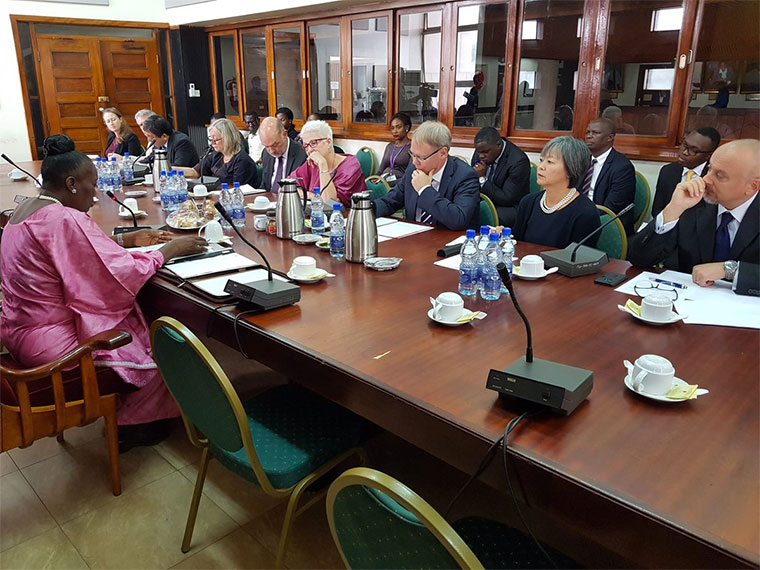 Ambassadors accredited to Uganda have questioned the delayed delivery of a judgment on the consolidated petition challenging the amendment of the Constitution to remove the presidential age limits.

The ambassadors were today meeting the speaker of parliament Rebecca Kadaga to discuss trends on Uganda’s democracy and good governance. This is the second ambassadors’ meeting with Kadaga following an earlier meeting in December 2016.

Similar to a protest letter written last week by city lawyer James Byamukama to the chief justice Bart Katureebe, the ambassadors demanded for the immediate delivery of the judgment on the consolidated ‘age limit’ petition.

Germany ambassador Dr Albrecht Conze observed that two months since the hearing of the matter at the Mbale High court was concluded, the judgment should have been delivered by now.

« The petition of Uganda Law Society focused on the perceived contravention of the Constitution as different times for different elections were at stake and on the violation of the integrity of parliament regarding to the entrance of presidential guards in the House of parliament in the course of the deliberations. Uganda Law Society argued that the amendment of the Constitutional Act should be declared void. The MPs suspended by you, madam speaker during deliberations also filed legal petitions ».

« The 60 working days timeframe that is provided for by the Uganda code of judicial conduct has a timeframe within which the court to deliver its ruling has just been exceeded. Now, there is a provision in the law that says; if there’s good reason not to abide by the timeframe, then it can be exceeded. This is a very interesting opening subject for our deliberations today, and we would be happy to have your comment on the current state of affairs, and also what you would think the timeframe could now be. Of course, it’s up to the courts, the courts are independent but am sure you have an interesting statement to make, » Conze added.

The Constitution Amendment Bill No.2 of 2017 emanated from a private member’s bill tabled by Igara West MP, Raphael Magyezi. Its enactment removed the upper age cap of 75 years and the lower age cap of 35 years for any citizen to contest for the highest office in the land.

It also extended the term of office parliament, and Local Governments from five to seven years and reintroduced presidential term limits that had been removed in 2005. But the amendments were challenged by seven petitioners, whose petitions were consolidated at the time of the hearing. They include Male Kiwanuka Mabiriizi, Winnie Kiiza, the leader of opposition in parliament, Uganda Law Society, opposition chief whip Ibrahim Ssemujju Nganda, and four other legislators.

The petitioners demanded that the Constitutional court overturns the controversial amendment on the argument that it was passed out of a violation of the Constitution, the supreme law of the land.

The petitioners questioned an allocation of Shs 13 billion which was shared among members of parliament to conduct consultations on the bill.  Parliamentary guidelines stipulate that a private members bill can only be accepted if it does not have any financial implication on the consolidated fund.

They added that the president acted out of the law when he assented to the bill in absence of certificates of compliance from parliament. Reacting to a concern by the ambassadors on the delayed decision on the matter, speaker Kadaga said that it was not proper for her to comment on the matter currently before the judiciary.

Kadaga’s response prompted further inquiry by Swedish Ambassador Per Lindgarde who tasked her to clarify on the atmosphere under which parliament passed the ‘age limit’ bill.

« Well, the proceedings are before the judiciary, so I can’t comment on their speed or lack thereof. I cannot anticipate what they are going to say. So for me,  I did my work and that’s finished. So if the court says something else, we wait for that. On the suspension, I don’t think you need to make serious issues about suspension – all of you [ambassadors] have parliaments and I do know that members get suspended. So no one should really make an issue about suspension. It is the right of the speaker to keep discipline in the house, » said Kadaga.

« I believe, you recall that the High court was invaded some years back. I don’t think you can ask the chief justice to explain what happened. If you’re invaded, you’re invaded. But what I have done here; is to eject any forces that are not civilian police. Those who used to hang around here, I also sent them away, so they are no longer here. I also closed access from the Office of the President into parliament. So what we have here is the Uganda Police Force under the parliamentary police. That is all I can say…. » she said.

Recently, the judiciary senior communications officer Solomon Muyita said that the judges handling the judgment on the consolidated ‘age limit’ petition are currently working on the final judgment and that the judgment will be delivered in not so long a period from now.

Muyita, however, said that the constitution does not necessarily give timelines for judgment on a constitutional petition to be delivered. 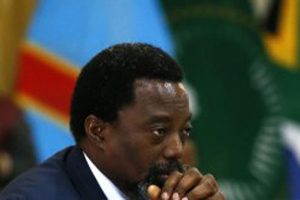