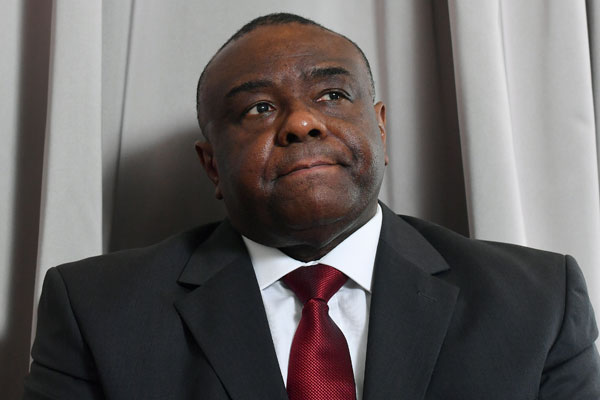 Former DR Congo warlord Jean-Pierre Bemba Tuesday denounced a long-delayed December presidential election as a « parody » after the country’s top court banned him from contesting. Bemba was one of six presidential hopefuls who was excluded by the election commission from the December 23 vote. He had appealed the decision but the Constitutional Court late Monday upheld the ban saying he was excluded for his conviction by the International Criminal Court (ICC) for bribing witnesses at his war crimes trial.

« The fact that one is choosing opponents… is very worrying, » Bemba told France 24 television, adding that the restive nation would witness « a parody of an election ». The former Belgian colony has not seen a peaceful transition of power since 1960.

President Joseph Kabila, who has held office since 2001, has finally said he will not run again after keeping silent on the issue for months and fuelling tension and deadly unrest in the volatile nation. Kabila’s second and final term ended two years ago. Some experts fear the country could spiral into bloodshed. Bemba had declared his candidacy after making a triumphant return home from Belgium, with tens of thousands of supporters turning out to greet him after the ICC based in The Hague acquitted him of war crimes charges.

In June, a sharply divided five-judge ICC bench overturned Bemba’s 2016 conviction and 18-year jail term for war crimes and crimes against humanity committed by his troops in the neighbouring Central African Republic in 2003. However, Bemba and five co-accused were convicted on appeal of bribery, corruption and of coaching 14 defence witnesses in his main trial. Later this month, the international court will sentence the former vice president for bribing witnesses.

Kabila who took over in 2001 after his father, Laurent-Desire Kabila, was assassinated by a bodyguard, is an arch-foe of Bemba. Kabila’s tenure over the vast mineral-rich country has been marked by a reputation for corruption, inequality and unrest. Bemba lost presidential elections to Kabila in 2006 and was later accused of treason when his bodyguards clashed with the army in Kinshasa. In 2007, he fled to Belgium, where he had spent part of his youth. He was then arrested in Europe on an ICC warrant for war crimes committed by his private army in the Central African Republic from 2002-3, when its then-president Ange-Felix Patasse sought his help to repel a coup attempt.

Bemba, who became vice president of an interim government from 2003 to 2006, was born on November 4, 1962 in Bogada in the northwest Equateur province. His father was a rich businessman close to dictator Mobutu Sese Seko, who ruled from 1965 until he was ousted in 1997. Young Bemba went on to take over the family businesses, using his popularity in the capital Kinshasa to build on his wealth and expand into sectors such as mobile phones, air freight and television.

He left the country in 1997 after Laurent-Desire ousted Mobutu. A war followed a year later and lasted till 2003 and drew foreign support on rival sides. Bemba became leader of the Congolese Liberation Movement (MLC) rebels, a 1,500-strong force backed by neighbouring Uganda and opposed to the Kabila regime.

The MLC, now a political party, on Tuesday urged the ICC to give « precisions » on its ruling, saying Bemba had been unfairly banned by the Constitutional Court. After the Congolese war ended in 2003, Bemba laid down his arms and was awarded one of four vice-presidential posts shared out among wartime rivals in a transitional government. The heavy-set magnate, an imposing 1.90 metres (6 foot 3 inches) tall, has been nicknamed « Chairman » and « Miniature Mobutu » for his headstrong character.