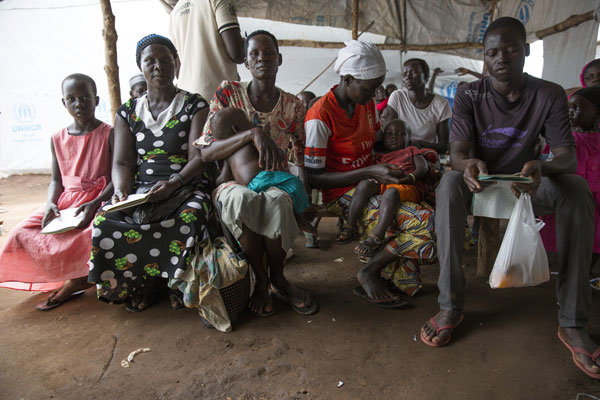 At 10.30am on a Monday morning, the youth centre (Muvubuka Agunjuse Adolescents Sexual Reproductive Health Information and Service Provision Centre) at Kisenyi Health Centre IV is crowded. About 100 boys and girls aged between 10 and 20 years, 30 per cent of whom are refugees, are crammed into pews, waiting their turn in the consultation rooms. Their eyes are glued onto the TV screen high up on the wall on which a movie is showing.

Near the door, a transparent container fixed to the wall is half full of pink-wrapped condoms. Boys and girls walk in and out and perhaps, the most mobile is Dieudonné Ndayishimiye, a 28-year-old Burundian refugee who acts as a translator.

Dr Julius Kasozi, the reproductive health and HIV coordinator at the United Nations High Commissioner for Refugees (UNHCR), says for urban refugees, the services are integrated into the host population health services.

« Working with the health department of Kampala City Council Authority (KCCA), the approach is to support existing health services at KCCA facilities to help refugees access them. However, at policy level, young people are not deliberately targeted with SRHR information because Kampala does not have a clear entry point for refugees, » Dr Kasozi says.

From the Refugee Community Centre in Kabuusu, Rubaga Division, Kampala, refugee youth are referred to Muvubuka Agunjuse where the most sought after services are STI treatment and access to family planning information and products.

Mr Robert Kiwanuka, the programmes manager at Muvubuka Agunjuse, says every morning, the youth (both refugees and host community) are taken through a list of services offered.

« One of the reasons young people fall victim in the area of reproductive health is lack of information, so from that list, we identify a topic to discuss. It could be teenage pregnancy, family planning, safe sex or comprehensive abortion care, » Mr Kiwanuka says.

The refugees come from conservative cultures and in the beginning, they have reservations about the contraceptive services. « They fear that Ugandans do not want them, so when you talk about family planning, they think you are trying to stop them from giving birth because they are foreigners, » Mr Ndayishimiye says.

Mr Kiwanuka adds that among the Somalis, there is a fear of using condoms. « We counsel them that the country they are now living in is full of HIV, so they are at risk. I have found that refugees change their attitudes according to the situation. For example, Congolese girls are vulnerable to gang rape as they move around those Kisenyi garages and maize mills selling jewelry, » he says.

At the youth centre, these victims are counselled, given post-exposure prophylaxis (PEP) and then offered SRHR information.

In the refugee settlements upcountry, refugees are given a minimum initial reproductive health service package by UNHCR. Mr Solomon Osakan, the refugee desk officer at Arua Refugee Desk in the Department of Refugees in the Office of the Prime Minister, says sometimes, the packages deliberately target teenagers.

The greater Arua area has 268,000 registered refugees and of these, 52 per cent are youth. Sr Dorothy Mawa, the focal person for refugee health in Arua District, says although they are aware of the SRH services offered at health centres, refugee youth do not like using condoms.

« They say HIV is a Ugandan disease. They have a very low opinion of it. Few of them voluntarily go to the health centres. However, they attend the outreaches held in the communities ».

By 3pm, Muvubuka Agunjuse is abandoned, except for seven boys watching TV. Luganda and English language leaflets showing bodily changes that occur as girls mature are strewn all over the floor. An emaciated young man in a purple shirt sits on a bench, looking lost. For 45 minutes, his attention is divided between the TV, the medical documents in his hands, and looking for help.

Ndayishimiye left duty at 2.30pm, so there is no one to translate this young man’s needs to the nurse. He only speaks Lingala and French. The nurse invites him into a room and soon, the raised voices of two people struggling to communicate are audible. Finally, she advises him to go to Mulago hospital. He drags his feet as he walks out, probably wondering how he will manage without a translator.

Dr Kasozi insists the youth centre has translators who were previously deployed on a volunteer basis but since there was a high turnover rate, InterAid Uganda hired six on a regular payroll.

However, in reality, Mr Ndayishimiye is the only translator for the entire health centre. His five colleagues left after InterAid Uganda stopped paying their allowances in January.

He translates at the youth centre, the main hospital and accompanies refugees who have been referred to the different branches of Mulago hospital. He does all this on volunteer basis without transport or lunch allowance.

« I can speak Kirudi, Kinyarwanda, French, English, Luganda, and some Lingala, » he says, adding: « But I tell you, it is not easy. When I was first deployed here, we had outreaches to encourage the refugee youth to come to the centre. Nowadays, there are no outreaches ».

On the days when Mr Ndayishimiye fails to get transport from his home in Nsambya, some refugee youth, who come for SRHR services, fail to explain their conditions to the health workers.

« Many do not get the services they need because of the language barrier. These days, the number coming to the centre has sharply reduced. If I help 10 refugees in a day, that is a miracle. Sometimes, because refugees cannot express themselves, a medical worker gives the wrong prescription ».

According to the World Health Organisation (WHO), youth-friendly SRH services should be equitable, accessible, appropriate, and effective. It is not easy for a girl to tell a man that she has had an abortion. Usually, the girl will tell Mr Ndayishimiye that her period has lasted for two weeks. He then has to find time for a deeper conversation to coax the truth out of her.

« This year, eight youth have died from complications such as post-abortion hemorrhage because of language barrier. Some were referred to Mulago but they chose to treat themselves at home because there are no translators ».

When asked about these deaths, Dr Kasozi says: « Yes, refugees lost lives to disease conditions that had been investigated and treated at the health facilities in Kampala just like other residents of Kampala ».

For refugee settlements in Arua area, ideally every health centre must have three translators. However, according to Osakan, patient-to-doctor confidentiality is breached.

« Sometimes a translator may not know that whatever has been discussed with the patient should stop at the health centre. When they go to the drinking point, maybe they get excited and what was confidential becomes public. This has led to gender-based violence in families ».

He adds that nowadays, health workers discourage the recruitment of translators. Instead, refugees hired to do support work at the facilities are sometimes called upon to translate.

INVESTING IN SRHR PAYS OFF

Africa has about 251 million youth (UN Department of Economic and Social Affairs) and by 2030, that number will have increased by 42 per cent. In 2006, Uganda signed and ratified the Maputo Plan of Action (MPoA) 2016-2030 as Africa’s flagship policy framework for universal access to comprehensive SRHR.

The MPoA brings into operation the Continental Policy Framework on SRHR, which recognises that there is a connection between family planning, reproductive health information and services, and sustainable economic development.

Speaking on the sidelines of the launch of the State of African Women Report in Nairobi, Kenya, last week, Ms Caroline Kwamboka, the head of external relations, advocacy and communications at International Planned Parenthood Federation (IPPF) Africa Region said: « Reaping from the demographic dividend requires Africa to invest in youth for job creation, SRH, and skills development. Countries that have developed have empowered young people to understand their SRHR, address them responsibly and access the services they require. This spares them energy to participate in economic development ».

In Bidi Bidi refugee settlement, the youth get SRHR information from their schools. Emmanuel Tomukajo, an 18-year-old Senior Three student of Koro Highland Secondary School, says: « The teachers tell us how to have safe sex. I tested for HIV and last month, I was circumcised. I have decided to abstain from sex until marriage ».

Rose Nyoka, an 18-year-old student of Kodejje Primary School, says: « The female teachers tell us that once we start having periods, we should stop playing with boys. Recently, my friend dropped out of school after she got pregnant ».

Lona Melling, 21, got married at 14 and gave birth to her first child at 15. At first, when she received family planning information, she was reluctant. « I did not want it. Besides, I had consult my husband who was still fighting in South Sudan. In the beginning, he was happy and our second born is four-years-old ».

Now, though, her husband is angry that she is taking too long to conceive. « I want to stop using family planning now, » Melling says, adding, « I want to have eight children ».

If women like Melling are not empowered to understand family planning they cannot be expected to give birth every year and at the same time, participate in economic development. Francis Duku, a 16-year-old student of Koro Highland School, says he is aware of the services provided at the health center, but « I will go there when I have free time – maybe in two years – to learn about circumcision and how to use a condom ».

Kwamboka argues that the responsibility is on civil society organisations (CSOs) to give adolescents accurate information.

« These things have already been agreed upon in the Maputo Protocol, MPoA, and the Abuja Declaration. So, let us support policy and legislative changes at national level to protect the rights of adolescents and support their access to comprehensive sexuality education and services. That way, they can be a productive labour force ».

Investing in the health of adolescents and youth to inform their reproductive choices enhances the quality of the future workforce.

More investment needs to be done to create demand for SRHR information and services. In the urban health centres, this investment could be channeled to recruiting and training translators in youth centres mitigate unmet needs.

Youth-friendly services are effective when the providers are friendly and the community supportive. Sister Mawa, concedes that the only way to reach youth in the refugee settlements is through the community leaders. « If the leaders are sensitised on SRHR, they can talk to the youths ».

Also, to monitor and evaluate the provision of SRHR services, centralised reproductive health data should be created. According to Dr Kasozi, no study has been conducted on the percentage of refugee youth who seek SRHR services or on the teenage pregnancy rate among refugees.

According to Sr Mawa, HIV prevalence rates among refugees have never been documented. This lack of data is a barrier to promoting youth’s access to SRH.