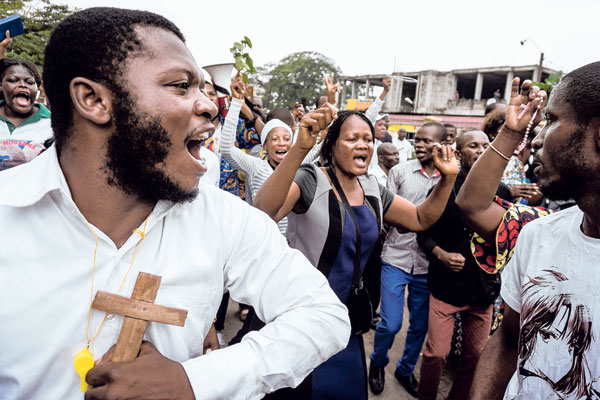 Supporters of five pro-democracy campaigners held without trial in the Democratic Republic of Congo since December demanded Friday that the activists be released — or at least face a judge.

The group’s lawyer Shabani Lukoo blasted the five activists’ « arbitrary » detention by security forces and said they had been tortured.

« It has been clearly established that since their arrest they have each suffered degrading and inhuman treatment ».

« It is now 161 days that they were secreted within (intelligence service) dungeons and deprived of visits and legal assistance in flagrant violation of the laws of the republic ».

Lukoo added that Beni, whose release Human Rights Watch called for almost a month ago, had stomach and knee problems and had undergone surgery, while Kabeya and Kalonji were also « in a very bad state » but had not received any health care.

The activists were arrested as they mobilised residents of the capital Kinshasa for a nationwide rally on December 31 last year against the extended rule of President Joseph Kabila. Six people were killed during the protests and the crackdown sparked international condemnation.

Lukoo said the five should either be freed or taken before « a competent magistrate ».

« I have written to the minister of justice, the prosecutor general of the republic, the head of the ANR (intelligence service) to find a solution. No reply. I have met the minister of human rights. Lots of promises, no action, » Lukoo said.

« They should free our children. Being locked up is moral torture, » said Bopomi’s mother, Marie-Colette Wumba.

The activists’ supporters are in touch with the UN human rights mission and have also called on the embassies of France, Belgium and Canada for support.

Congolese officials meanwhile said Friday that three policemen had been killed in an attack by an armed group in the eastern town of Butembo near the Ugandan border.

« The town of Butembo was the target of an armed attack Thursday by unidentified assailants. The police station was targeted. Three policemen are dead, » police officer Richard Mbambi told AFP.

The town hall confirmed the attack in the Beni region of the troubled province of North-Kivu.

An army spokesman confirmed a separate attack on an army post elsewhere in Beni early Friday blamed on armed Ugandan Islamist group ADF that left one attacker dead and one soldier hurt.