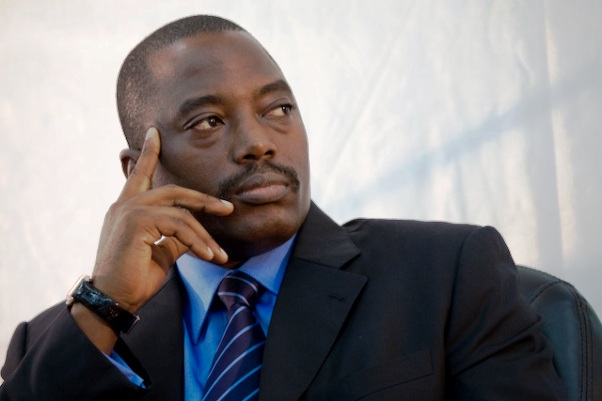 Democratic Republic of Congo leader Joseph Kabila is certain to manipulate the country’s constitution and run for a third term when the elections are held in December.

President Kabila is constitutionally barred from seeking re-election but has no intensions of leaving power after illegally extending his stay in office for two years.

The DRC, the vast impoverished African nation that sits on some of the world’s major natural resources, was due to hold elections in December 2016 to end President Kabila’s rule.

However, even after the delay, the incumbent is still manouvering to change the constitution and prolong his stay – which started in 2001 when his father Laurent – was killed.

According to Bloomberg, changes at the Democratic Republic of Congo’s Constitutional Court could clear the way for President Kabila to run for a third term, a situation that deepens the central African nation’s political crisis.

Kabila, in power since 2001 and constitutionally barred from seeking another term, a week ago announced the appointment of three new judges to the court. Two are well-known allies, fueling concern among the president’s critics that his supporters could press for rulings permitting him to run in elections scheduled for December.

« The Kabila clan will now do everything to push big decisions and big questions to the Constitutional Court and the court will respond in favor of Kabila’s political family, » opposition lawmaker Martin Fayulu said by phone from the capital, Kinshasa. The Presidential Majority, Kabila’s ruling coalition, said the nominations were « completely normal and legal ».

Congo, Africa’s largest copper producer, has never had a peaceful transfer of power and any attempt to further extend Kabila’s rule would outrage his opponents, most of whom say he should have stepped down when his second term finished in late 2016. Elections weren’t organized in time and Kabila remained in office, sparking sporadic protests in which security forces killed dozens of people.

The electoral commission, known by its French acronym CENI, has scheduled polls for Dec. 23. Kabila’s refusal to indicate who’ll be the candidate for the Presidential Majority has spurred speculation he’ll seek to change or reinterpret the constitution to run again — or even delay the vote.

The president, parliament and the High Council of the Judiciary each appoint three judges to the nine-member Constitutional Court.

Kabila chose Norbert Nkulu Kilombo, ambassador to Rwanda and a member of his People’s Party for Reconstruction and Democracy, while parliament named Francois Bokona, who’s also a lawmaker for the party. The High Council nominated Jean Ubulu Pungu, one of its former heads.

« The judges don’t work for Joseph Kabila or his Majority, » said his coalition’s spokesman, Andre-Alain Atundu. « They work for the interest of all ».

Bokono declined to comment on his appointment when contacted by phone.

« Everyone has his own perceptions and convictions, » Nkulu said, declining to comment on criticism of his appointment. « In all the countries of the world it’s the head of state who names all those who fill our position, » he said.

While the court had lost its independence years ago, some judges have continued to push back, said Stephanie Wolters, head of the peace and security research program at the Institute for Security Studies in Pretoria, South Africa.

« Now Kabila seems intent on locking it down completely in his favor, surely because he anticipates that he will need it to rubber stamp his plans to hold on to power, » she said.

Opponents see several scenarios by which Kabila could extend his rule.

Ahead of Congo’s last vote in 2011, a constitutional amendment changed the presidential election from a two-bout contest to a single round. Kabila’s supporters may argue he’s only served one term under this revised constitution and seek a court ruling backing that claim, according to Georges Kapiamba, president of the Congolese Association for Access to Justice, a local non-governmental organization.

An attempt by Kabila’s backers to file his candidacy at CENI would likely be rejected, but that decision could be appealed at the Constitutional Court. That chamber could then rule he’d been wrongly rejected him because the 2011 amendment « equated to a change of regime, » according to Kapiamba.

Alternatively, he said, pro-Kabila parliamentarians could petition the court to seek an interpretation that would let him run again. Fayulu said he’s concerned over the role the court will have in resolving any electoral disputes, or that it could allow CENI to again delay the polls.

The president’s adversaries claim the two judges who resigned in April following the death of a colleague were pressured into the move. Kabila’s allies saw them as « recalcitrant, » Fayulu said, and both were notably absent from an October 2016 hearing where the court authorized the CENI to postpone elections.

« There is an intention to take actions at the Constitutional Court which are outside the popular will and outside the constitution, » said Eve Bazaiba, secretary-general of the Movement for the Liberation of Congo, a major opposition party. « It’s one of Kabila’s strategies because he doesn’t want to leave and he hasn’t selected his dauphin ».