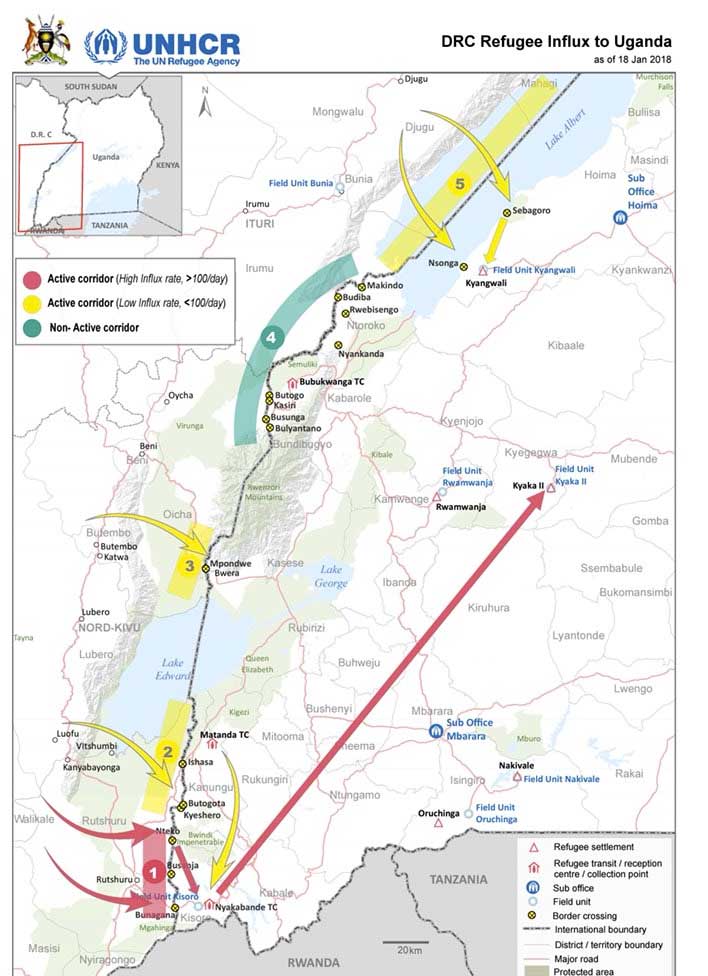 The European Union has announced Shs 450 million in humanitarian aid towards Congolese refugees in Uganda.

A statement from the EU delegation in Uganda says 100,000 Euros will be available to the International Federation of Red Cross and Red Crescent Societies (IFRC).

13 970 refugees are said to have crossed from Congo’s Ituri and North Kivu provinces into Uganda since early December 2017. It is estimated that Uganda is host to about 242,000 Congolese refugees according to the EU statement.

The refugees report that they fled a new cycle of inter-communal violence which saw armed groups killing, looting and torching houses.

« Renewed fighting and atrocities in DRC are driving thousands of Congolese from their homes. After the long journey, many of them arrive in the refugee settlement weakened and destitute. EU funding is being released to increase the safe water supply and improve sanitation, hygiene and health services. It is crucial that we provide dignified living conditions and prevent disease outbreaks, » said Isabelle D’Haudt, head of office for EU civil protection and humanitarian aid in Kampala.

The EU funding is part of the its overall contribution to IFRC’s Disaster Relief Emergency Fund (DREF) and will allow the Uganda Red Cross Society to assist 6,000 new Congolese refugees arrivals from Djugu in Ituri province.

The majority of these refugees according to the statement, are reaching Uganda in rickety fishing boats across Lake Albert before being transferred to Kyangwali refugee settlement.

The fleeing Congolese are reportedly unable to pay for the journey across the lake. The majority (65%) of the refugees are children.

The statement says for an initial period of 3 months, the Red Cross staff and volunteers will provide assistance in the fields of health, water, sanitation and hygiene.

The support will engage in health outreach, psycho-social support, epidemic prevention and control as well as start hygiene promotion activities.

Among them, 9,427 people arrived from North Kivu through Uganda’s southwestern borders with the DRC. Another 4,724 fled DRC’s Ituri region and entered Uganda across Lake Albert using fishing boats and canoes.